Using Qualified Charitable Distributions to Get a Triple Tax Benefit

If you have financial legacy goals, you’ll want to consider how taxes affect the impact of that legacy, because every dollar you pay in taxes is one less dollar that can be used for legacy giving to support the people and causes you care about. One of the most strategic tax planning options to help you meet your legacy goals, especially if those goals include charitable giving, is Qualified Charitable Distributions.

What is a Qualified Charitable Distribution (QCD)?

What is the benefit of a QCD?

QCDs are one of the most powerful charitable giving incentives in the tax code. Essentially, you are taking money that has never been taxed, growing it tax-deferred, then giving that compounded growth to charity, at which point you get another tax-deduction, thereby avoiding taxation on distributions that would otherwise be taxable.

Let’s break down the tax implications of QCDs a bit further.

QCDs, on the other hand, give you a triple tax benefit because of the ability to avoid taxation on distributions from your Traditional IRA that would otherwise be taxable. We are now getting to a point of leveraging not just the power of compound growth or even tax-deferred compound growth, but of tax-free compound growth, to super-size your lifetime giving impact.

Another benefit of QCDs is that the distributions count toward your Required Minimum Distributions (RMDs).  Uncle Sam, in his benevolence, allows tax-deferred savings into IRAs and 401ks as an incentive to get people to save for retirement.  But he does not allow this tax deferral to go on indefinitely; at some point, he wants his cut.  This is where RMDs come in.

Starting at age 72 (the recently enacted SECURE act raised the RMD age from 70½ to 72), the IRS requires you to distribute a percentage of the balance on your pre-tax retirement accounts every year, and that percentage increases every year for the remainder of your life.  These distributions are fully taxable as ordinary income (i.e. added on top of all other income and taxed at your highest marginal rates), so this can start to put a tax squeeze on retirees if they haven’t planned strategically for this eventuality.

To make matters worse, the SECURE act also changed the RMD rules for heirs who eventually inherit these IRAs.  Whereas heirs used to be able to stretch out their own RMDs on inherited IRAs over their lifetime, they now must fully distribute all assets from the inherited IRA within 10 years of the original IRA owner’s death.

On average, an heir receiving inherited IRA assets is in their late 40’s/early 50’s and typically in their peak earning years.  So, now over a 10-year period when they are likely in the highest-earning years of their career, they must take much larger RMDs that get added on top of their income and taxed at their highest marginal rates.  When it comes to planning for inheritance goals, this is not an ideal situation in which to put your heirs (although some retirees prefer to leave the tax burden with their heirs for various reasons).

Fortunately, QCDs offer significant relief for the charitably inclined, allowing you to divert large swaths of your pre-tax IRA money to charitable giving each year, leaving post-tax money to meet retirement spending and inheritance legacy goals.  Of these post-tax accounts, Roth IRA assets tend to be good for leaving to heirs because heirs receive the money tax-free.  They will still have RMDs (again because Uncle Sam doesn’t want those assets staying in the Roth account growing tax-free forever), but those distributions will be tax-free.

Appreciated securities in taxable brokerage accounts can also be good for bequeathing to heirs, because the cost basis on your holdings will be stepped up to the market value on the date of your death.  This step-up in basis exists in the tax code because finding out what someone’s parents or grandparents paid for an asset can be an administrative nightmare.

The net result of this rule is that any unrealized gains get wiped away for your heirs, leaving them with a clean slate (this is true as of this writing, but there is growing discussion among federal lawmakers about getting rid of this step-up in basis, although any change would likely be met with howls of resistance from CPAs and tax accountants, who would bear the brunt of having to help track down cost basis from many decades prior in some cases).

For illustration, let’s say you purchased a share of stock for $100 many years ago, and it is worth $300 on the day you die.  There is $200 of unrealized gains that would have been taxable if you sold that holding, but when it passes to your heirs, the cost basis gets stepped up from $100 to $300.  They can now sell that stock without realizing any gains and having to pay taxes on it.

Before we leave the topic of RMDs, I should note (because I have found that many retirees haven’t made this connection) that come RMD age, the IRS only requires you to distribute from the IRA so they can receive the tax revenue.  The IRS does not require you to spend that money, so if you don’t need it for your living needs, you can always reinvest it in a regular post-tax brokerage account and continue to grow your wealth surplus for legacy giving.

So, to summarize, QCDs effectively give your pre-tax IRAs a triple tax advantage by allowing you to deduct your contributions, grow the assets tax-deferred, and then distribute the QCDs free from the taxes that would otherwise be assessed through RMDs. Additionally, QCDs are an “above the line” deduction rather than an itemized deduction, meaning you can benefit from the standard deduction and still get the full tax benefit of your charitable gifts.

Why does it matter if a QCD is an above-the-line deduction rather than an itemized deduction? Let’s look at an example to see.

Using the illustration below, let’s say your gross income in a given tax year was $100K, and you gave $20K to charity. Let’s also assume you file taxes jointly with your spouse and there are no further deductions to be itemized.  If you just gave that $20K from non-IRA money, your adjusted gross income would still be $100K. You would take the standard deduction of ~$24K (because it is higher than the $20K in itemized deductions for charitable giving), and your taxable income would be ~$76K.  If, on the other hand, you make the $20K in charitable giving as QCDs, it would reduce your gross income from $100K down to $80K, you would again take the standard deduction of ~$24K, and your taxable income would now only be ~$56K. 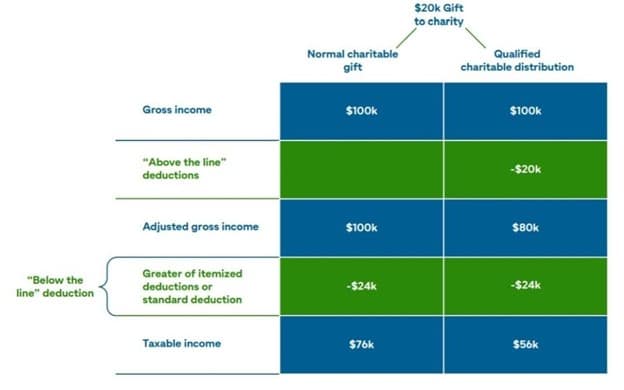 Furthermore, because QCDs don’t increase your adjusted gross income (AGI), they avoid pushing you into higher tax brackets that could potentially expose you to the Medicare surtax or increase the proportion of your Social Security income that is taxable. This also avoids potentially driving your Medicare premiums higher and reducing eligibility for certain tax credits and deductions that are tied to AGI.

Hopefully this gives you a good sense of how QCDs can help you achieve your charitable legacy goals and maximize the impact of that legacy through minimizing the portion of your wealth surplus that goes to taxes.  If you would like further assistance in defining and achieving your legacy goals, Charis Legacy Partners can help, so feel free to schedule a free consultation with us.